Maker of Violins, Violas and Cellos

Click here for a listing of restored fractional instruments 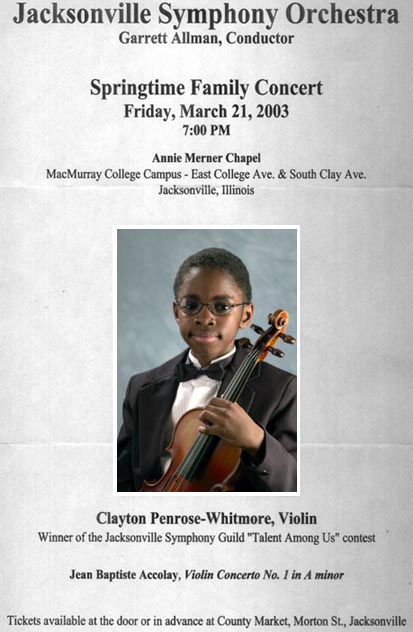 Clayton Penrose-Whitmore began studying violin at age 4, and is a student of
Georgia Hornbacker, Associate Professor of Music at Millikin University and
Associate Concertmaster of the Illinois Symphony Orchestra. He is also a
piano student of William Choat of Sherman, Illinois. Clayton plays in the
Sangamon Valley Youth Symphony and in the string quartet ensemble of that
orchestra, as well as the Lincoln Land Community Orchestra and the
University of Illinois at Springfield Chamber Orchestra. He performs often
at church, at weddings, and has appeared as a guest performer at many other
events.

Clayton is enrolled in the Gifted Magnet Program in the 7th grade at
Franklin Middle School in Springfield, Illinois. He likes math, science and
reading. He enjoys playing soccer and baseball, and has attended summer
music camp for the past 6 years.

Clayton won the WUIS-WIPA Young Musicians Contest youth division in
December, 2002. He played at First Night Springfield 2003 & 2004. He won the
grand prize at the Jacksonville Illinois Symphony Guild's "Talent Among Us"
contest in February, 2003, and was a soloist with the Jacksonville Symphony
in March, 2003.

He was a featured soloist at the Unity Temple Concert Series: New Century
Young Artists, on January 24, 2004, in Oak Park, Illinois. He performed as a
soloist with the Illinois Symphony Orchestra at its Sneakers And Jeans
concerts and Educational concerts in March, 2004.

He won the Sangamon Valley Youth Symphony 2004 Concerto Competition, and
performed as a soloist at the Symphony's spring concert on May 15.

Clayton was a concerto soloist with the Illinois Symphony Orchestra,
conducted by Karen Lynne Deal, December, 2004, in Springfield and
Bloomington, Illinois.

He won the Guild award in the Marie Stillwell Young Artists Competition, and
soloed with the Alton Symphony Orchestra in April, 2005.